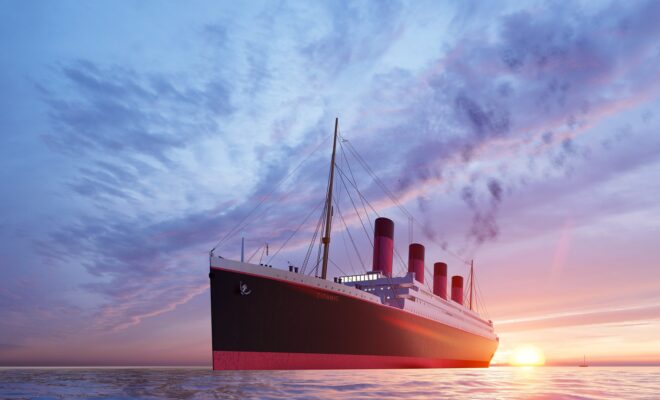 The Tragic Story of the RMS Titanic

The RMS Titanic was a British passenger liner that sank in the North Atlantic Ocean on the night of April 14th, 1912, after striking an iceberg during its maiden voyage from Southampton, England to New York City. The Titanic was the largest and most luxurious ocean liner of its time, with a length of 882 feet and a displacement of 46,328 tons. It had a total of 2,224 passengers and crew, of which more than 1,500 perished in the disaster.

The Titanic was built by the White Star Line and was the second of three Olympic-class ocean liners constructed for the company. Its construction was supervised by Thomas Andrews, the managing director of the shipyard. It was designed by Alexander Carlisle, the chief draughtsman of the Harland and Wolff shipyard. The ship was powered by two reciprocating four-cylinder, triple-expansion steam engines and a low-pressure Parsons turbine. It had sixteen watertight compartments, which were designed to keep the ship afloat even if up to four compartments were flooded.

The Titanic departed Southampton on April 10th, 1912 and stopped at Cherbourg, France and Queenstown, Ireland to pick up additional passengers. On the night of April 14th, the Titanic encountered an iceberg in the North Atlantic, which caused five of its sixteen compartments to flood. Despite the crew’s attempts to control the flooding, the Titanic began to sink at 2:20 am on April 15th. At 2:20 am, the Titanic split into two parts and sank to a depth of 12,500 feet.

The sinking of the Titanic caused a media sensation and sparked a wave of public outrage. An inquiry was launched to investigate the disaster and its causes, which revealed a number of human errors and oversights that led to the tragedy. The disaster resulted in the adoption of new safety regulations for ships, including the installation of more lifeboats and the introduction of the International Ice Patrol.

The Titanic remains one of the most famous shipwrecks in history, and its story has been the subject of countless books, films, and documentaries. The wreck of the Titanic was discovered in 1985 and has been explored by a number of research teams. The Titanic’s remains lie at a depth of 12,500 feet, and the site has been designated as a protected marine sanctuary by the United States and the United Kingdom.