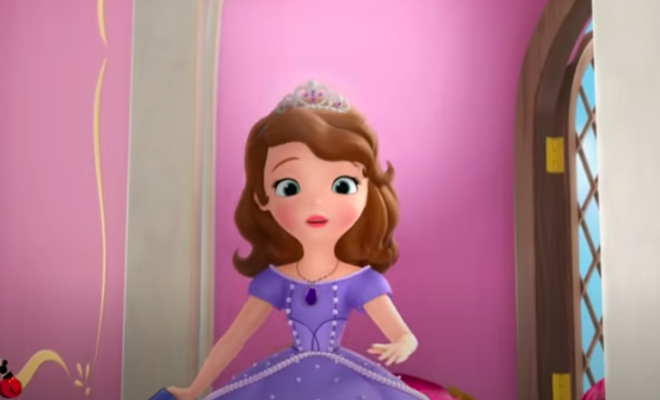 The Magical Adventures of Sophia in the Disney Kingdom

Once upon a time, there was a little girl named Sophia who lived in a small town. She was a happy and adventurous girl, with a huge imagination. Every day, she would explore her backyard and dream of faraway lands. She would imagine herself as a princess, living in a castle and wearing beautiful gowns.

One day, while playing in her backyard, Sophia heard a noise. She turned around and saw a small, white rabbit hopping down the path. She followed the rabbit, curious to see where it would go.

The rabbit hopped along the path until it reached a large, wooden door. Sophia was amazed when the door opened and a large, magical kingdom appeared before her. She walked in and was greeted by a kind old man. He introduced himself as the King and welcomed her to his castle. He told her she could stay as long as she liked and that she would be treated like royalty.

Sophia explored the kingdom and met many wonderful people. Everyone was so friendly and welcoming. She was amazed by the sights and sounds of the magical kingdom. Everywhere she looked, she saw something new and exciting.

One day, while walking through the gardens, Sophia saw a fairy fluttering around a fountain. The fairy was small and sparkly, with a shimmering wand in her hand. She smiled at Sophia and invited her to join her.

The fairy introduced herself as Tinkerbell and asked Sophia if she would like to join her on a magical adventure. Sophia was thrilled and accepted the invitation.

Tinkerbell and Sophia set off on a journey through the magical kingdom. Everywhere they went, they encountered new and exciting adventures. Sophia learned all kinds of things, like how to make wishes come true and how to do magic.

At the end of their journey, they reached a beautiful castle. Tinkerbell told Sophia that the castle belonged to a powerful prince. She said she was sure he would be happy to have a guest as special as Sophia.

Sophia returned to the magical kingdom many times after that. She made many new friends and learned so much. She was so thankful for the wonderful adventure she had with Tinkerbell and the prince.

Sophia’s adventures in the magical kingdom were a cherished part of her childhood. To this day, she still remembers them with a smile.