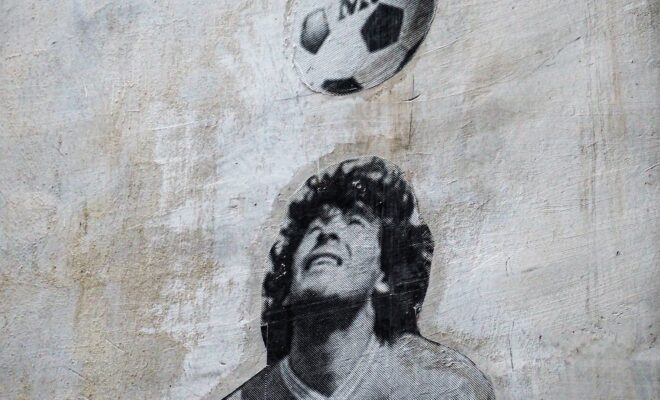 Diego Armando Maradona was born on October 30th, 1960 in Buenos Aires, Argentina. He started playing football at a very young age and quickly became one of the most talented players of his generation. He had an amazing career, playing for some of the best clubs in the world, including Napoli, Barcelona, and the Argentina national team.

Maradona was known for his amazing dribbling skills and creativity on the field, but he is also remembered for his controversial goals, most notably the “Hand of God” goal in the 1986 World Cup. This goal was scored with his hand, which is against the rules of the game. He was also known for his off-field behavior, having been involved with drugs, alcohol and even Che Guevara.

Maradona played in 91 games for the Argentina national team, scoring 34 goals. He won the 1986 World Cup with Argentina, scoring 5 goals in the tournament, and was named the best player of the tournament. He also won 2 Copa Del Rey titles with Barcelona and a Serie A title with Napoli, for whom he played for 7 seasons.

Maradona finished his career in 1997 and since then he has been involved in many aspects of the game, including coaching and ambassadorial roles. He had 5 children and was married twice. His first marriage was to Claudia Villafañe, his long-time girlfriend, and they had two daughters together. He later married Veronica Ojeda, with whom he had a son, Diego Fernando.

How did Maradona die?

On November 25, 2020, the legendary football star, Diego Maradona, suffered a heart attack and passed away in his home in Dique Luján, Buenos Aires. Despite attempts to revive him, the footballer was pronounced dead at 1pm local time. Maradona had recently gone through surgery to treat a subdural hematoma, a type of brain clot.

The news of his death shocked the nation, with thousands of people paying their respects at the wake. Maradona was buried on the 27th of November at the Jardín Bella Vista cemetery next to his parents. A 2021 report detailed his agonising final twelve hours, citing negligence and failure to provide adequate hospitalisation which could have saved his life.

In the wake of Maradona’s death, prosecutors charged his medical team, claiming they had acted in an “inappropriate, deficient and reckless manner.” The team is accused of “simple homicide,” which is taking a life with intent. The team consists of eight people, including doctors, nurses, and a psychologist, and if found guilty, they could receive sentences between eight and 25 years.